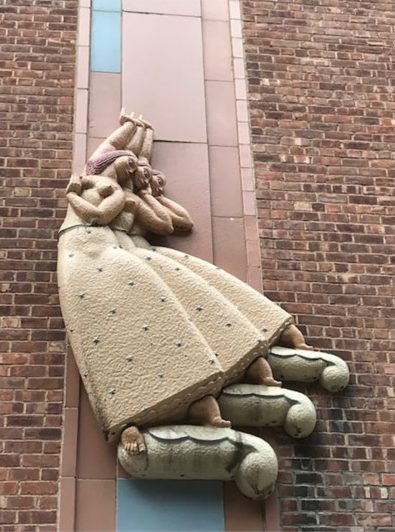 Parkchester in the Bronx: Awaiting a designation decision

Parkchester, Metropolitan Life Insurance Company’s predecessor to Stuyvesant Town and Peter Cooper Village, broke new ground and set the bar in terms of urban planning for large, high-density apartment complexes when developed in the late 1930s through early 1940s. Located in the Bronx, Parkchester comes close to being a city in itself with 51 buildings sited on 129 acres with parks, community facilities and integrated street-level retail. It was the first major example of towers-in-the-park urbanism in the country. While the architecture didn’t make a big push toward Modern movement forms taking hold elsewhere—seven- to 13-story red brick buildings as far as the eye can see—Parkchester’s architecture distinguishes itself through its large scale figurative terra-cotta details. More than 1,000 sculptural elements once graced the red brick facades.

A May article by John Freeman Gill in the New York Times, “Priceless Sculptures Are ‘Literally Being Chipped Away,’” presents an engaging history of the complex and documents the striking terra cotta work as context for the main story—the removal and possible loss of 45 of the terra cotta works by the board of managers overseeing Parkchester. The article gives voice to The Parkchester Project and other preservation advocates working to halt further removal and gain protections for the complex. In 1978 Parkchester was one of five areas in the Bronx recommended for Historic District designation in an internal Landmarks Preservation Commission survey. It’s the only one currently left undesignated. Preservation forces are trying again. Late last year DOCOMOMO US/New York Tri-State wrote in support of designating the complex, a pioneering example of modern housing planning. In March Parkchester was named to the Historic Districts Council’s “Six to Celebrate in 2022” list. The Commission reports it is undertaking research and evaluation to determine Parkchester’s architectural merit and historic significance.

“Priceless Sculptures Are ‘Literally Being Chipped Away’,” New York Times, May 20, 2022.