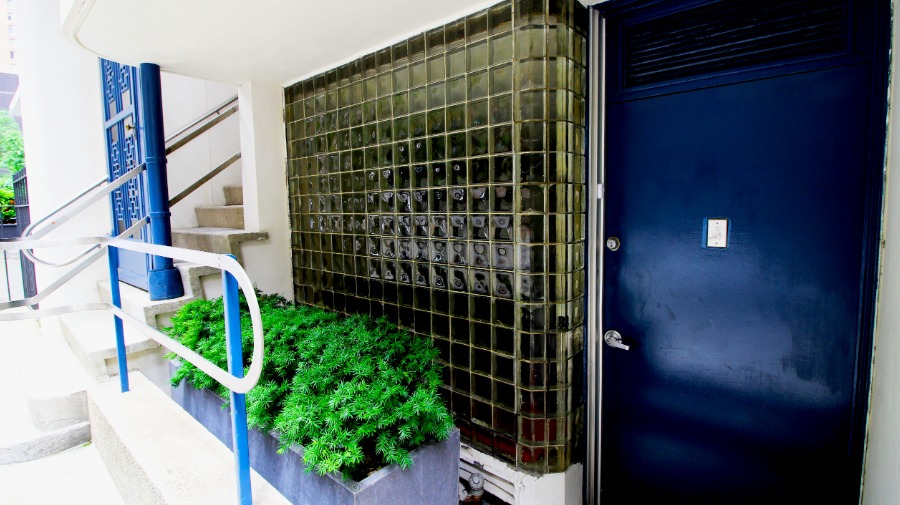 The groundbreaking Lescaze House & Studio at 211 East 48th Street, designed by William Lescaze for himself, is before the Landmarks Preservation Commission (LPC) with a Certificate of Appropriateness application requesting numerous alterations, threatening the integrity of this important and early work of Modern architecture. The proposal would dramatically change the building’s exterior envelope by building a penthouse, extending existing chimneys, completely removing the entire original historic rear façade and attempting to replicate it six feet further north, and lowering the rear yard.

William Lescaze (1896-1969) was among the most important European architects who introduced Modern architecture to the United States. A native of Switzerland, a young Lescaze emigrated here in 1920 seeking opportunities to build, more than fifteen years before Gropius, Breuer, and Mies arrived the late 1930s. With architect George Howe, Lescaze designed the PSFS Building in Philadelphia, completed in 1932, widely considered the first International Style skyscraper in the United States.

Completed in 1934, the innovative Lescaze House was the first International Style residence built in New York City, the first house in the city with central air conditioning, and the first building in New York City to employ structural glass block. Lescaze lived and practiced architecture in the house for three and a half decades, until his death in 1969. In 1976, the LPC recognized its exceptional significance by making it one of the very first works of Modern architecture in the city to be individually designated. It was also listed on the National Register in 1980.

The Turett Collaborative, architects for the party requesting the Certificate of Appropriateness, presented the proposed project to the LPC at a public hearing on January 19. DOCOMOMO US/New York Tri-State President John Arbuckle delivered testimony on behalf of the chapter via Zoom encouraging the LPC to reject the proposed expansions (read testimony). The Historic Districts Council and the Victorian Society of New York also spoke in opposition.

Unfortunately, the house has suffered from some deferred maintenance and its iconic front façade is in need of restoration. The proposal included a respectful restoration of the front façade, including preserving original historic materials where possible and replacing failed glass blocks with new custom fabricated blocks to match the existing ones. DOCOMOMO’s statement applauded and encouraged efforts to carefully restore the façade.

Many Commissioners expressed admiration or fondness for the building and most objected to two major aspects of the proposal. All Commissioners opposed moving the rear wall back six feet and reconstructing it. Commissioner Everardo Jefferson stated he “couldn’t believe” it was even being proposed. The architects intend to reuse the existing historic glazed bricks in the new façade. However, Commissioner Michael Devonshire noted that because of the hardness of the mortar employed at the time it was built, removing it from the original glazed bricks without damaging them would be impossible so they would need to be replaced with new brick. Most Commissioners opposed the penthouse as currently proposed as being too large and visible. However, many indicated they could support a penthouse if it were smaller and less visible. No action was taken that day. The LPC will let the applicant revise their proposal and return at a future date. It is safe to assume that any updated proposal will not include moving the rear wall by six feet and that any proposed penthouse will be smaller and less obtrusive. Stay tuned.