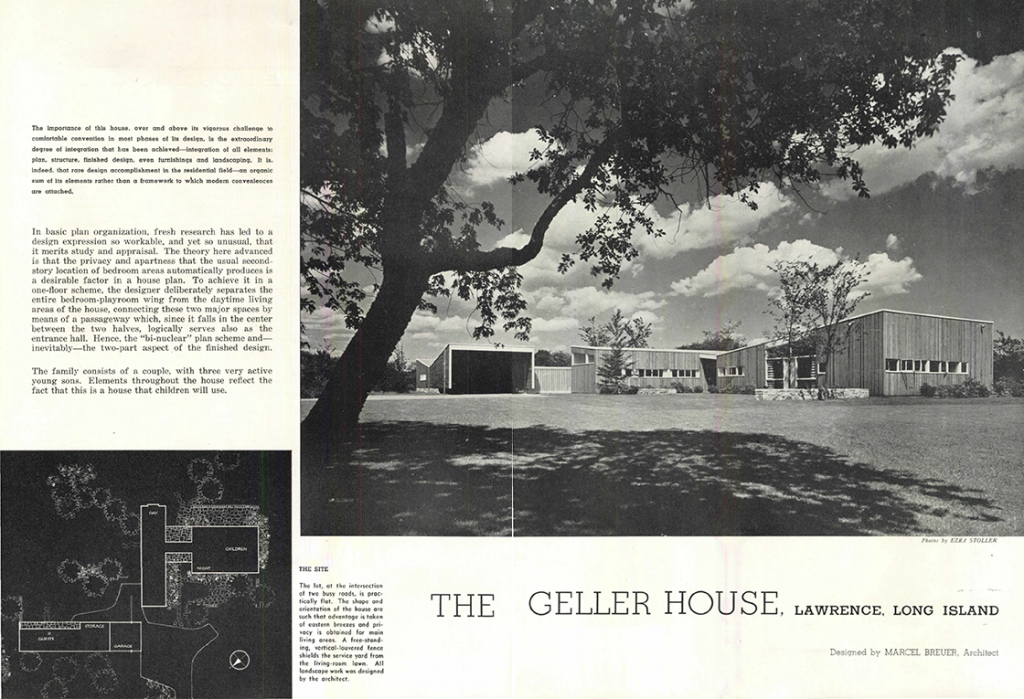 Opening spread from Progressive Architecture's 17-page article on Marcel Breuer's Geller I House published following its completion in 1947. Photos in the article by Ezra Stoller. Article courtesy: US Modernist

Another important Modern house has been senselessly demolished. Sadly, Marcel Breuer’s first Geller House in the Village of Lawrence on Long Island, designed in 1945, was recently torn down by the current owner. The site will be used to build a tennis court and tea house for their new house on the adjoining property. Not only was it a largely intact house designed by the Bauhaus master but it was Breuer’s first house constructed after his partnership with Walter Gropius and his first bi-nuclear house.

The house received worldwide coverage in the architectural press when completed, starting with a 17-page feature in Progressive Architecture. Open article PDF (10MB). Article PDF sourced from US Modernist archive.

Since early December, several board members of DOCOMOMO US/New York Tri-State worked as part of a coalition led by DOCOMOMO US to try to preserve the house. As part of that effort, DOCOMOMO US submitted an application for local landmark designation. The chapter submitted a letter on December 9 in support of that application. Unfortunately, the present owner could not be persuaded to preserve it.

The chapter was long aware of this house and of its importance. We visited Geller I, which was then well preserved, as part of the “Modern Architecture in Queens and on Long Island Tour” which we organized as part of the VIIIth International DOCOMOMO Conference in New York City in September 2004.

The Docomomo US website includes a detailed explanation of recent events and background on the Geller I house:
https://docomomo-us.org/news/marcel-breuer-s-first-bi-nuclear-house-is-demolished

An excellent opinion piece by Liz Waytkus, Executive director of Docomomo US, looks at the limited options for protecting significant modern movement homes and what needs to change.
The Destruction of Breuer’s Geller house feels like the Penn Station moment for modern homes,” Dezeen, February 4, 2022: