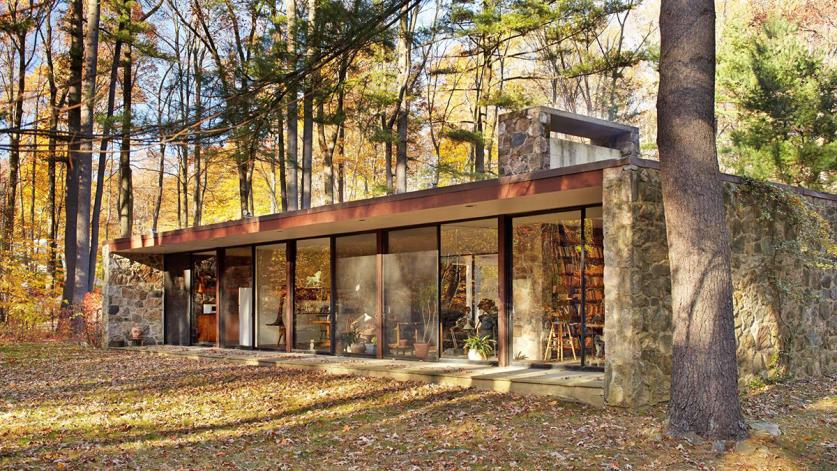 This June, The Cultural Landscape Foundation (TCLF) will host a daylong excursion to three Modernist masterworks – the Noyes House II by Eliot Noyes, the Glen House, a rare residential commission by Richard Neutra, and the Fish Church by Wallace K. Harrison (the latter two in nearby Stamford) – along with lunch at elm restaurant in New Canaan. The excursion is curated by TCLF Board Member Joeb Moore, FAIA.

When Modernism roared into the New Canaan, CT area in the late 1940s, it transformed the visual language of design and revolutionized the construct of daily life. Free, open, and airy, with seamless transitions between indoors and out, the melding of Modernist landscape architecture and architecture left an imprint that remains fresh, startlingly innovative, and endlessly inspiring.

One of the pioneers was architect Eliot Noyes who built two residences for his family, one in 1947 that no longer stands, and one in 1954 that is still owned by his descendants. Composed of two parallel rectangular field stone and glass structures separated by an open-air courtyard, it has been called “one of New Canaan’s crown jewels of modern design.” The house is also listed in the National Register of Historic Places.

Moore renovated the Glen House, one of only three residences Richard Neutra, famed for his work in California, designed in Connecticut. The family that commissioned the project required divisions of public and private space that Neutra did not favor. Moore said the goal of his work was “to reach beyond what was constructed [in 1959] and bring it back in-line with Neutra’s original vision for the house.” The partially wooded landscape features low slung natural rock outcroppings.

The First Presbyterian Church of Stamford, built in 1958, is also known as the “Fish Church” because of its distinct fish-shaped floor plan. Architect Wallace Harrison, working with landscape architect Bryan Lynch, considered it to be his finest work. Designated a National Historic Landmark in 2021, the church’s sanctuary features giant depictions of the Crucifixion and the Resurrection by French stained-glass artist Gabriel Loire incorporating more than 20,000 pieces of glass. The gently sloping seven-acre landscape includes a memorial garden and cloister, and is the setting for a freestanding carillon tower, also designed by Harrison. At its opening the project was hailed by New York Times architecture critic Ada Louise Huxtable and was a focal point in an exhibition at the Museum of Modern Art the following year.

Transportation and lunch will be provided.