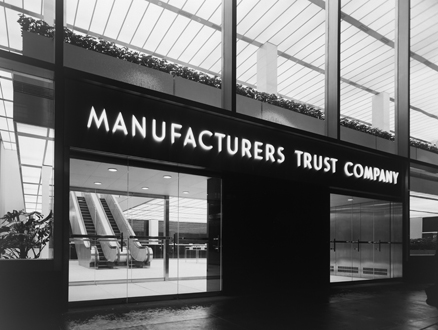 A structure where exterior and interior were conceived as one thing, unified and inseparable, to be seen and understood as a continuous visual, spatial and aesthetic experience.

After serving as a bank for over half a century and achieving official NYC Landmark status, the building was converted in 2012 to retail spaces. DOCOMOMO New York/Tri-State advocated in 2010 for the Landmark designation of its interior and in 2011 against some of the alterations in connection with the retail conversion that were subsequently approved by the New York City Landmarks Preservation Commission.

The design concept of the bank by SOM partner Gordon Bunshaft was a response to the client’s forward-looking program and the specifics of its site. The structure’s transparency responded to the bank’s wish to appear progressive and readily accessible to an expanding range of customers. On this site at the corner of West 43rd Street, a glazed volume like this could be accommodated, without sun-control devices obstructing its transparency, because its corner plot faced north and east and was shaded by taller surrounding structures. Continuous luminous ceilings – newly developed in the 1950s – allowed a consistently high level of interior lighting to maintain the transparent aspect even on sunny days.

In a 2010 article in the Wall Street Journal, architecture critic Ada Louise Huxtable characterized the building as “a structure where exterior and interior were conceived as one thing, unified and inseparable, to be seen and understood as a continuous visual, spatial and aesthetic experience.”

Since the bank needed more public interior area than the site’s limited square-footage, SOM came up with a two-story scheme that they subsequently applied to other Manhattan branch banks. (This concept, with a lofty second-floor banking hall above a smaller-scaled street floor, had been pioneered in Howe & Lescaze’s Philadelphia Savings Fund bank building of 1932; functionally, the lower first-floor height shortened the escalator run to the second level.) By setting their second level here back from the outer glazed walls – cantilevering it from interior columns – the architects gave it the appearance of a mezzanine hovering in a unified space totaling some 40 feet in height.

Above the banking spaces, the building includes two full office floors and a penthouse. A taller structure was not permitted on the site, since the 500 Fifth Avenue office tower next door held an easement limiting any construction above 60 feet.

Interior design details, with off-white terrazzo floors and low, minimally detailed tellers’ counters, maintained the severe Modernist character of the bank’s envelope, but were not attributable to SOM, which hadn’t yet established the substantial interiors department that designed many of its subsequent interiors. The credits for this elegantly spare treatment belong to designer Eleanor Le Maire, who had worked on previous commissions for Manufacturers Trust.

One widely noted feature of the interior was the massive Mosler vault door, visible to passersby just a few feet behind the Fifth Avenue street-floor glass. Designed by Henry Dreyfus, the door balanced the innovative transparency of the bank with a striking expression of security. It was the symbolic protector of a massive, cubic vault, clad in black granite, set within the glazed volume. (The customary entrance to the vault was actually another door at its inner end.) Other interior features of note were a 70-foot-long screen of gold-painted steel plates by sculptor Harry Bertoia and an airy suspended metal sculpture by the same artist.

Its exterior was designated a Landmark in 1997, but it was not until the building was sold to Vornado Realty Trust in 2010 for conversion to retail use that there was a move toward greater than skin-deep protection here, where exterior and interior formed a continuous totality. Preservation advocates, including DOCOMOMO New York/Tri-State, argued for interior Landmark designation, which was approved in 2011.

Vornado proposed accommodating two retail outlets, both fronting on Fifth Avenue, within the bank branch volume. Since the bank entrance had been from 43rd Street, the new owners proposed cutting two doors into the previously uninterrupted avenue facade. They also proposed replacing the original escalators – a feature cited in the interior Landmark designation – with new ones re-oriented 90 degrees to relate to the store’s new Fifth Avenue entrance to the larger store. The publicly visible vault door would be retained, as a historical artifact, but the stone-clad vault was to be reduced to make way for retail uses.

DOCOMOMO New York/Tri-State and other preservation organizations objected to these alterations, but the Landmarks Preservation Commission accepted all the major ones. As alterations then proceeded, a lawsuit was brought by The Coalition to Save Manufacturers Hanover Trust, the Citizens Emergency Committee to Preserve Preservation, and an individual petitioner, seeking to prove that the Certificate of Appropriateness issued by the Landmarks Preservation Commission compromised the Landmark-worthy qualities the Commission agreed to protect with its exterior and interior designations. A settlement of the suit yielded some more stringent requirements concerning the vault walls and the partitions dividing the two retail spaces, and it laid the groundwork for the return of the two Bertoia sculptures, which had previously been removed as property of Chase Bank.

Before the lawsuit, the owners had begun gutting the interior. Because the altered escalator location and other changes would affect its structural framing, the second floor was entirely removed, to be restored later, with revised framing, to more or less its original configuration.

The completed alterations exhibit some respect for the buildings landmark architectural qualities. The entry doors from Fifth Avenue are minimally detailed and fit within the original street-wall framing. Divisions between the two retail spaces are of clear glass for the first several feet behind the glazed facade to minimize their visual presence. The luminous ceilings, which had suffered decades of ad hoc modifications, have been replaced with up-to-date components that accurately replicate the original appearance. And the Bertoia works are reinstalled in appropriate locations where they can be appreciated.

Architects for the building’s alterations and restorations were Skidmore, Owings & Merrill, the same firm responsible for the original design. And their recent efforts there received a 2013 Merit Award from the American Institute of Architects, New York Chapter.

In 2012, the Joe Fresh apparel store opened in the larger of the two street-floor spaces plus the entire second floor. While the tenant’s motley clothing displays present a very different image from the banking operations previously in this building, the concept of the transparent volume is still shown off to reasonable advantage.
—John Morris Dixon
2013